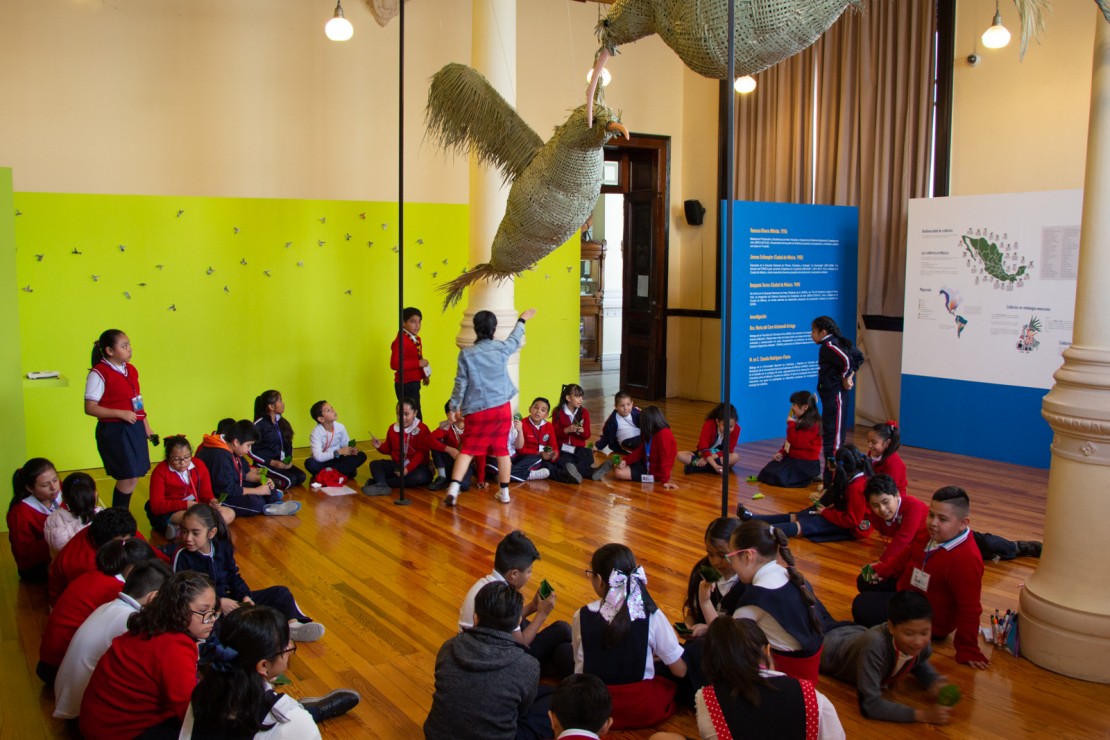 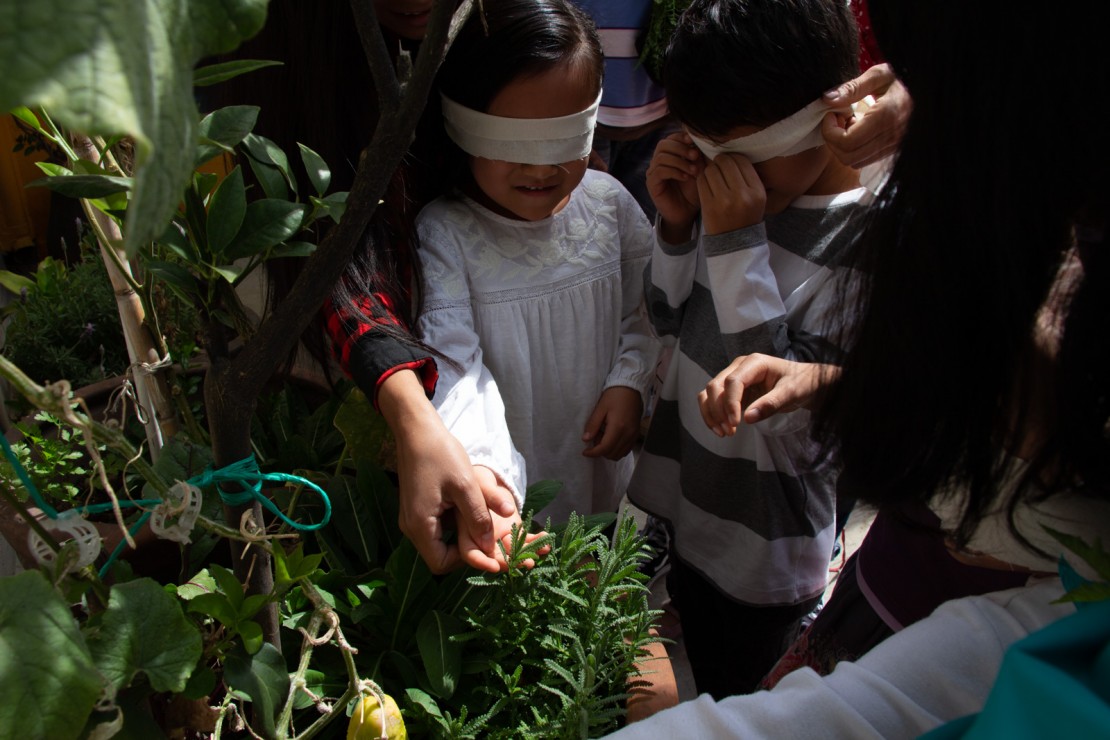 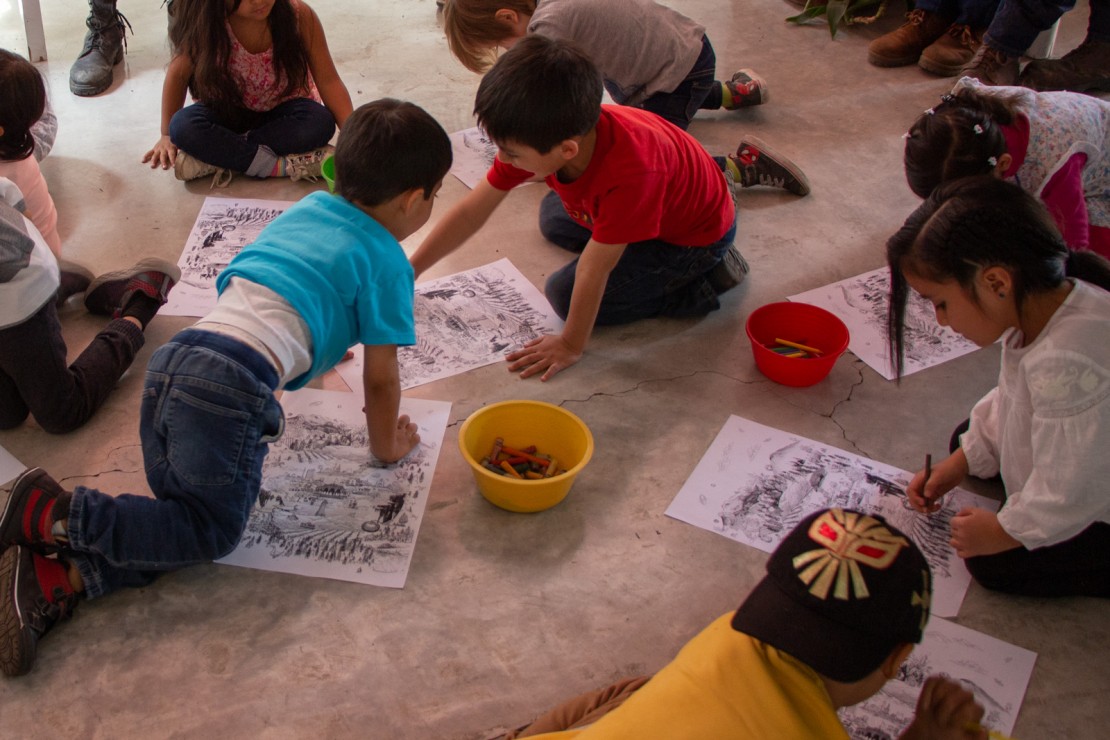 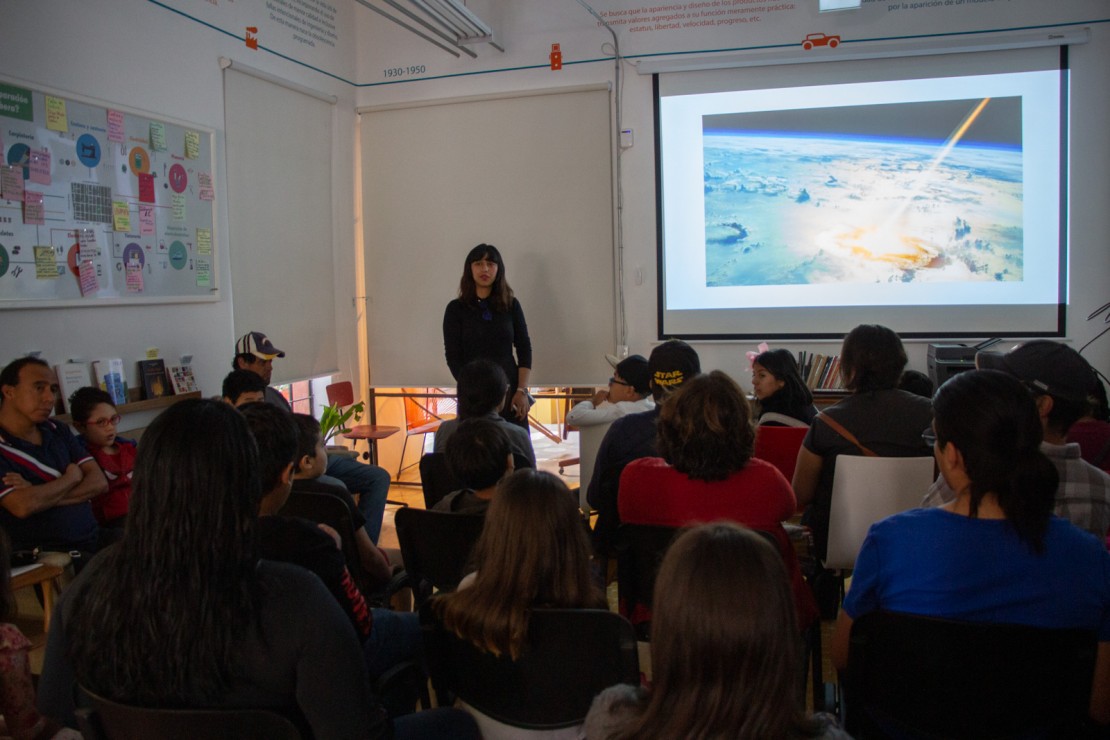 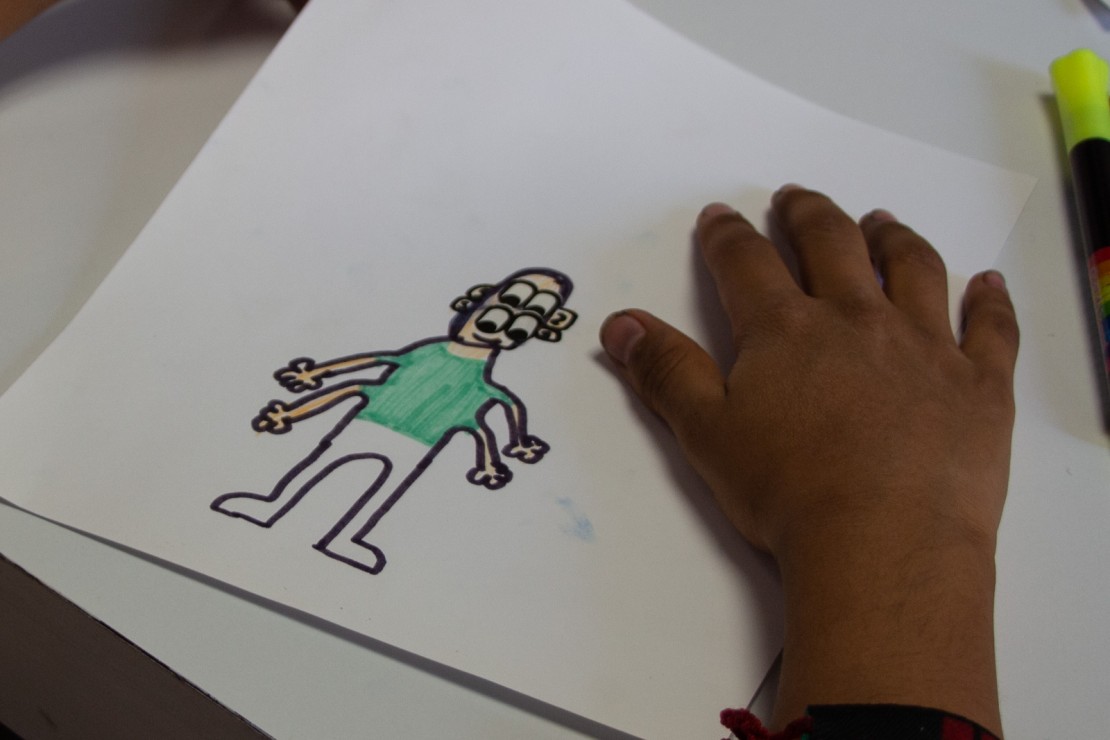 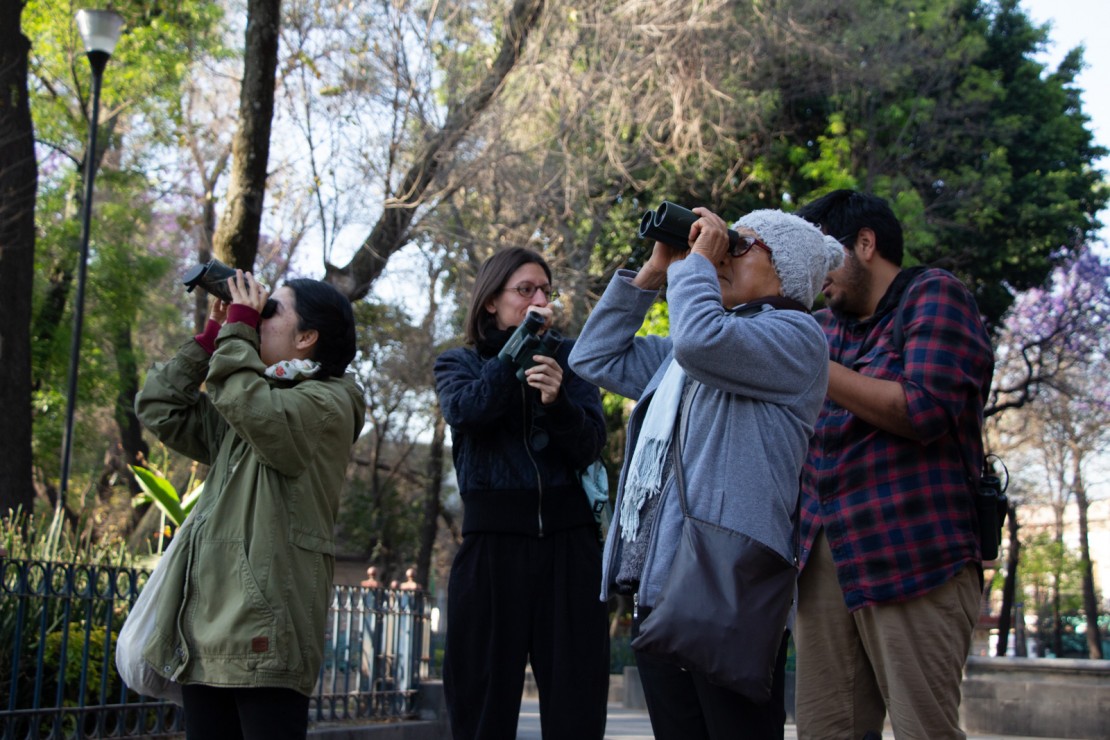 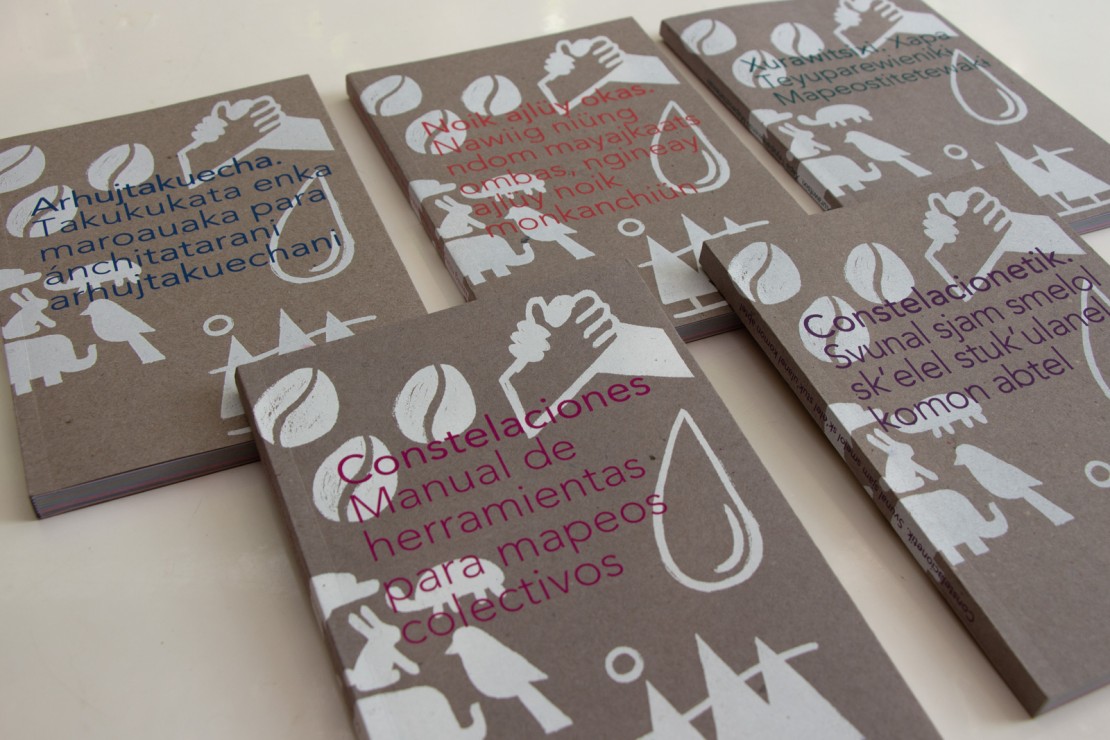 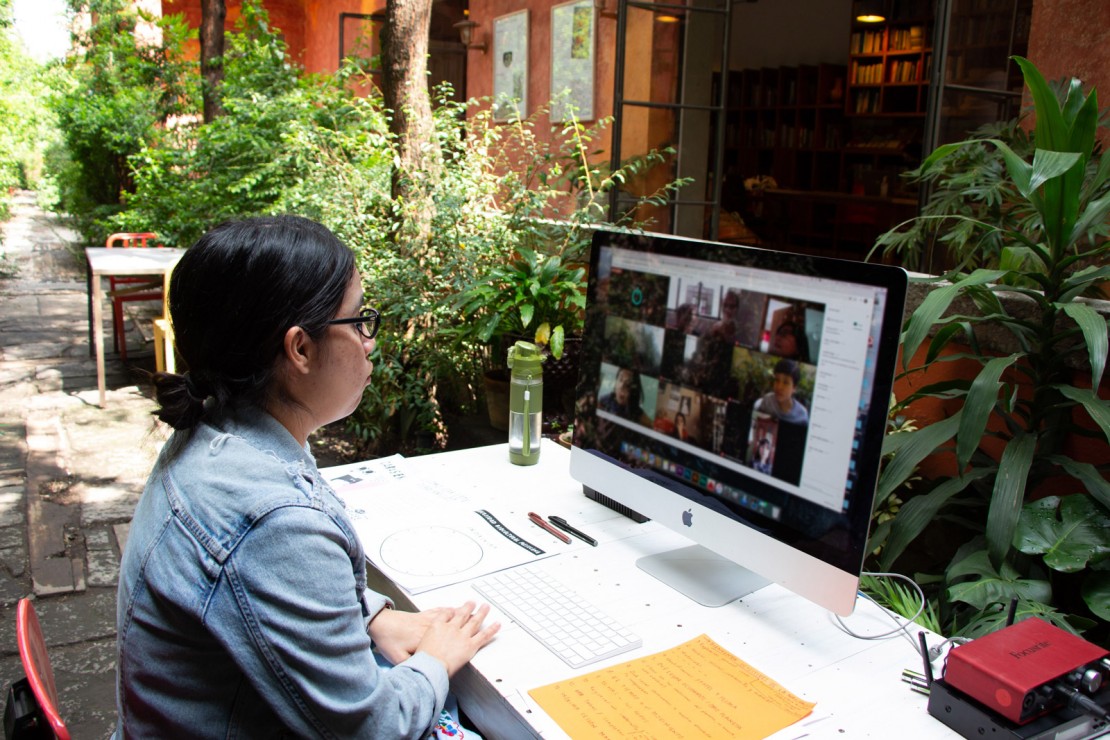 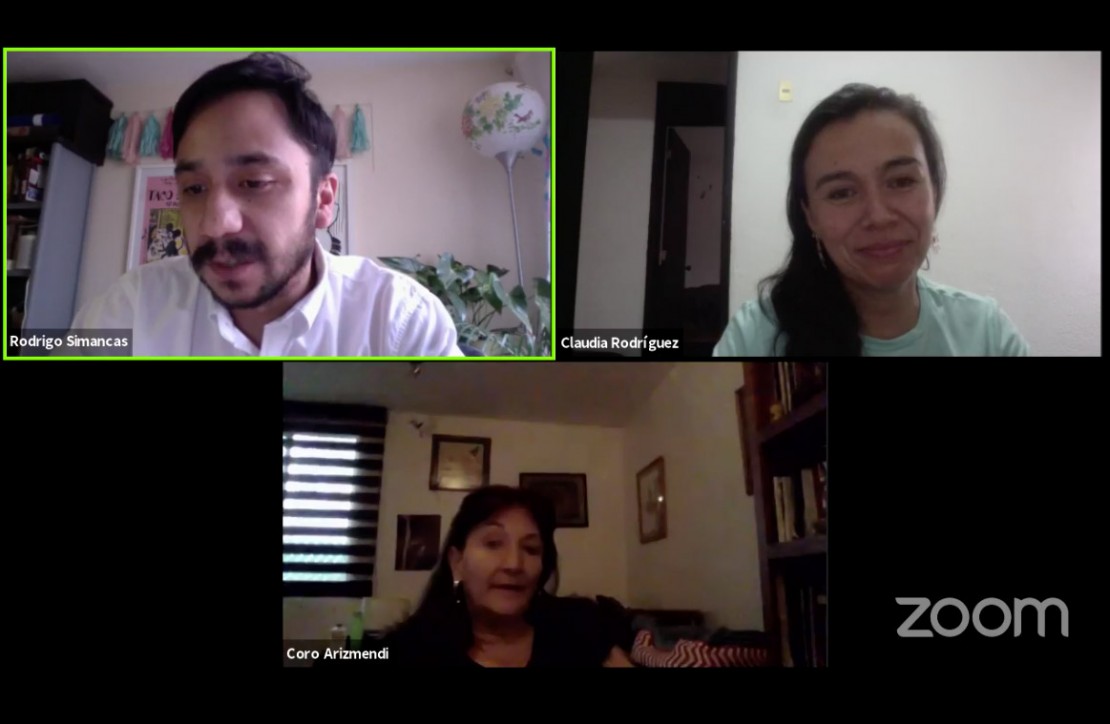 The various components of the program aim to encourage a critical perspective on the impact of human actions on the preexisting balances of natural ecosystems. The contents provided tools for analyzing current situations, reviewing their evolution over time and proposing possibilities for action in everyday life to transform them.

The strategy was built in alliance with specialists who propose multidisciplinary perspectives from biology, permaculture, linguistics, anthropology and art. The programs are implemented in the Santa María la Ribera neighborhood as well as in other territories, collaborating with local initiatives such as Na Bolom in San Cristóbal de las Casas (Chiapas), Neanch Collective in San Mateo del Mar (Oaxaca), as well as through alliances with community agents in tsotsil-, wixárika-, ombeayiüts- and purépecha-speaking territories, among others.

Dates: December 2019 to March 2020 (Due to the Coronavirus pandemic, visits to the exhibition were stopped early on March 13)

The exhibition Colibríes / huitziltin / ts'unu'uno'ob (which translates as Hummingbirds in English), is a platform for presented as a platform for critical reflection on the relationship that humans have with fauna, specifically with one of the most emblematic birds on the American continent: hummingbirds.

The exhibition takes its name from the Náhuatl and Mayan words for hummingbird. Taking up these words means an acknowledgment of the relevance of these birds, whose diversity not only represents the richness of the biological balance and the American ecosystems, but also an outstanding cultural heritage for its population.

The show incorporates an investigation of Dra. María del Coro Arizmendi Arriaga and M. in C. Claudia Rodríguez-Flores, biologists who specialize in hummingbirds and have over twenty years of experience researching the subject. The exhibition also presents works commissioned to Mexican artists Vanessa Rivero, Jimena Schlaepfer and Benjamín Torres, created specifically for the exhibition.

The exhibition period at the Geology Museum allowed school groups and neighbors to experience educational activities related to the subject. Invitations to neighbors are sent through Facebook, printed flyers and via WhatsApp. In the case of schools, Casa Gallina reaches its directors and teachers after linking the topics covered in the exhibit with subjects covered in the classrooms, such as environmental science, art, chemistry, and so on.

Guided visits were adapted to the group's profile, for example, if it was a group of neighbors the activity was to map spaces within the neighborhood that could potentially be transformed into hummingbirds gardens; if it was a school group, children would wrote messages on banana leaves that would be converted through an origami exercise into a hummingbird.

On numerous visits, participants expressed that this exhibition had shown them how directly connected daily human life is to species conservation, they commited, for example, to plant flowers on their balconies to help hummingbirds eat and pollinate, as well as exploring the possibility of installing hummingbird gardens in their common areas. Some teachers requested extra material on the topic in order to deepen the knowledge on hummingbirds and daily life during their classes; school principals expressed interest in creating hummingbird gardens in their schools. These result show that the activities within the exhibitions have the potential to become interventions guided by the community and do allow a constant circulation of knowledge.

In the framework of the COVID-19 pandemic, the exhibit had to close and suspend all previously scheduled visits. However, there was enough time to create a visual record of the work and design a virtually guided visit, which includes some of the activities carried out on face-to-face visits. It can be viewed here:

Constellations is a manual that was born out of an initiative of generating critical knowledge tools and interactions between communities and their territories. The contents were developed from the 2015 collaboration between Casa Gallina and Los Iconoclasistas, Julia Risler and Pablo Ares duo, whose work pioneered the development of methodologies and tools for collective mapping to critically understand territories. The content of this publication generates available tools for collective work, improving the resources available for the diagnosis of everyday problems and concerns of community life. The material is especially aimed at knowing and understanding the processes that threaten the territory and traditional practices of coexistence with the natural environment.

This publication will be distributed and activated with organizations, groups and community leaders throughout the country who hold a body of social work that would be extended using this tool. They will be able to identify common ground, analyze it and address the problems attached to their territory from various perspectives.

The profile of these projects has a crucial component of openness, that is, they are open organizations, which bring community members together at public spaces. Often the resources available for this sector are scarce; with this in mind, the publication includes alternatives that help adapt to the resources available in any setting, keeping its focus on enhancing critical observation of the social aspects that threaten universal access to the common goods necessary to preserve harmony with nature.

In this workshop, children between three and seven years old, accompanied by family members, toured the house entirely under the guidance of neighbor, storyteller and history promoter Juan Luis Delgado. He spoke to them about how human beings established a perimeter of distance between their habitat and the rest of nature, which has expanded as societies developed from villages to big cities. In the community garden they picked carrots to visualize the physical transformations that occurred; in the classroom they tackled—through body expression dynamics—curiosities found in cities throughout history; in an illustration on the wall, they played a game locating elements (animals, vegetation, monuments and places) within Mexico City. Finally, they carried out a relaxation and sensitization exercise that consisted of a blindfolded exploration of the plants on the rooftop, in order to concentrate on sounds, aromas and textures.

Origins: From the Cosmos to the Earth Workshop

In the Origins: From the cosmos to the Earth, children discussed the main scientific theories regarding the origin of life on Earth, collected minerals from the Casa Gallina garden to analyze them in a microscope searching for traces of stardust, and made collages to create their own living beings, assigning them biological characteristics as well: the type of food they eat, mobility and symbiotic relationships with other organisms.

Board Game for Children: I Recreate the City

Participants: Children from 8 to 12 years old.

I Recreate the City is a board game for children in elementary school designed by artist Javier García Silva, which seeks to provide children with a reference model that allows them to approach and better understand the tensions between nature and urban sprawl. The plot of the game is that the children play characters, half human beings and half living beings endemic to the Valley of Mexico, whose mission is to live in the city. As a team they must face human actions that accommodate for an irrational growth of the city; thus allowing their "natural half" to coexist in harmony with their "human half". In I Recreate the City, children do not compete with each other, but must defeat the titans who are represented by consumerism, deforestation, cars, excessive industrialization, garbage and concrete. This game will be distributed in primary schools in order to collaborate with teachers and educators, while using it as grounds to develop pertinent environmental education programs.

Sparrows, Hummingbirds, Doves and Other Neighbors with Wings and Feathers

Birdwatching carried out in the Santa María la Ribera grove, which served to observe other, less common species of birds such as the rock wren, Harris falcon, American robins, larks, the curve-billed thrasher and the Berylline hummingbird, in addition to grazers, sparrows, pigeons and turtle doves. The visit was complemented by a conversation between neighbors, which revolved around identifying the characteristics of the city that force endemic varieties of the region to be displaced and remain out on on the edge of the city. In the case of the birds that cross it, their adaptability to our habits and ways of life was analyzed, the discussion also included how we can benefit birds’ adaptability within our daily habits and practices, while allowing them to develop alongside us.

Our Ecosystem: The City

Participants: 81 people connected to the live broadcast and more than 1,000 subsequent reproductions

The biologists María del Coro Arizmendi Arriaga and Claudia Rodríguez-Flores, researchers in charge of the UNAM hummingbird monitoring station, discussed the surprising complexity of relationships between living things in the city and how, by understanding them, we can contribute to the delicate balance that sustains them. They delved into the importance of acting in a safe and intelligent way in order to improve the conditions for hummingbirds and other birds that inhabit Mexico City, inviting the audience to be aware of the need to reconnect with nature.

Nature Detectives, the course on biodiversity for children from 9 to 12 years old, began on July 4, 2020. It was facilitated through various channels: live video calls with the participants, Google Classroom sessions, and personalized individual on-site sessions at Casa Gallina, where all preventive measures were taken.

The course attracted 45 children, each received kits containing work materials such as magnifying glasses, colors, pots, seeds, and gardening tools, among other things. One of the intentions of providing these kits was for the course to transcend the screen, thereby promoting interaction with the immediate environment within the home or creating micro-ecosystems. The activities undertaken in each session promoted observation, research and creativity skills.

A workbook containing all the sessions’ exercises was designed and printed specifically for this course, which allowed participants to capture their progress in a playful way. Children used the Manual How to Explore the World Without Leaving Home previously developed by Casa Gallina. Both products will be integrated into the Earth Nook Project.

Distribution of Constellations: A Manual for Collective Mapping

The distribution of the book Constellations: A Manual for Collective Mapping, published in Spanish, Wixárika, Purépecha, Ombeayiüts and Tsotsil, began in March of this year. The publication has been distributed among 18 organizations and has allowed new relationships to be started with civil organizations in indigenous and peasant communities in various regions of the Mexican Republic. 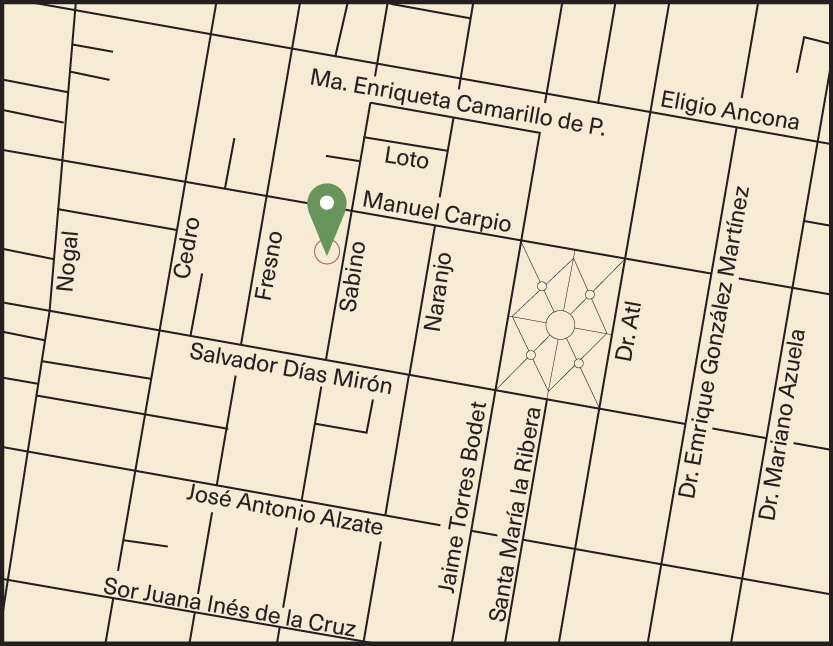